I arrived in Assisi two days ago after a too-busy attempt to see as much of Rome as possible. Here it's much quieter. There's a lot to see and a lot to take in but I have longer - nearly a month - so I am much more relaxed.

Today Br Thomas Anthony came back after a week away. It was good to welcome him back. Also today I learnt something about shops. They close about midday and then reopen maybe about 5pm. I had offered to cook but but 6pm the greengrocer was still not open and I was unable to cook. No problems. Just go out to dinner!

One of the favourite foods of the region is truffles - and so for the first time in my life I have enjoyed truffles - in two different ways. One in a creamy sauce with pasta, the other with mushrooms on bruschetta. I've also enjoyed coffee with grappa. So there are plenty of spiritual delights in this place...

No photos yet - the internet connection is too slow.

Posted by Christopher John ssf at 2:49 PM No comments: 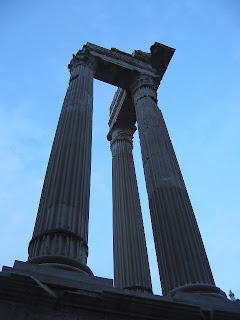 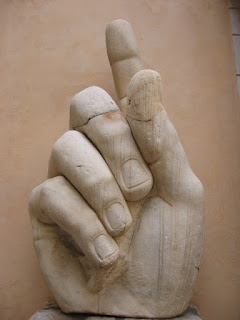 First - my time in Rome is not a holiday. For a true Roman holiday you of course need Audrey Hepburn and Gregory Peck. Nor is it La Dolce Vita - although half of the local population look like extras from that other great Roman movie. I'm here for a few days on the way to Assisi and also just to see some of the sights. And on a small budget nothing is like in either of those movies! 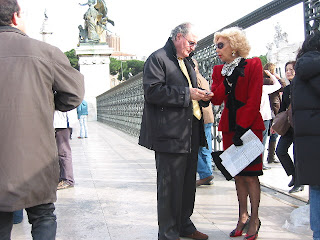 In front of Il Vittoriano, a very elegantly dressed lady. Obviously not a tourist.

I arrived on Friday Nov 23rd, travel weary after about 30 hours since departing the friary in Korea. Italians are elegant, even after long flights. I could not possibly have been mistaken for one so I was surprised when a very elegant woman came to me while waiting for the train and spoke to me in Italian. When I obviously couldn't understand she switched immediately to perfect English and asked if I had the time. There are a number of answers to that. I spared her my wit at 7am and gave the straightforward answer.

How far had I come? The first advertising billboards visible from the airport train were Kia and Hyundai. 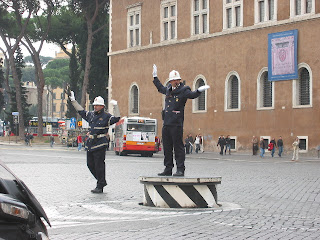 Police attempting to control the traffic 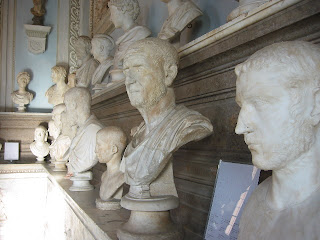 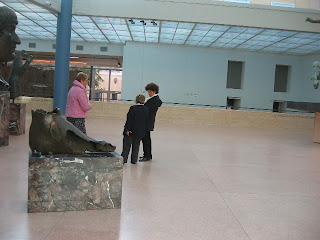 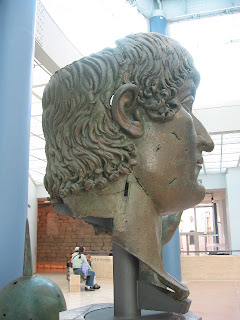 Capitoline Museum
That day I wandered round the historic city centre - close to where I am staying. Lots of churches (admission is free). The Capitoline Museum and the Risorgimento Museum in the Il Vittoriano monument - full of Garibaldi relics - and those of other leaders of the national unification movement. No stranger than having relics of martyrs in churches. 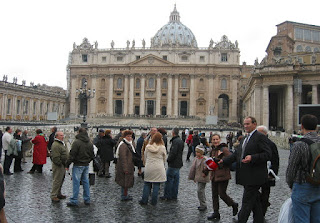 The queue for St Peters 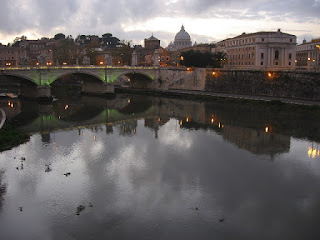 St Peters from across the Tiber 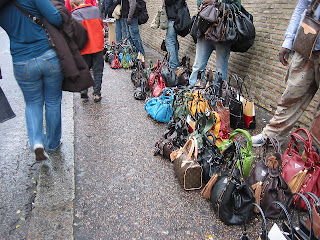 Handbag sellers outside the Vatican 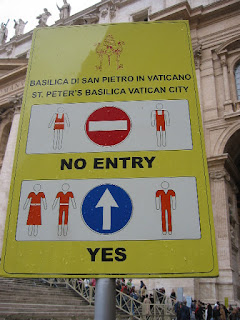 The dress code - alas it was too cold for anything skimpy 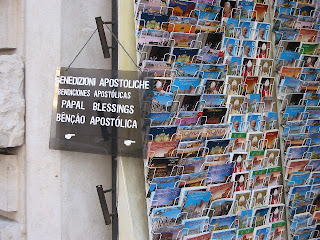 You want a papal blessing? Only used once. 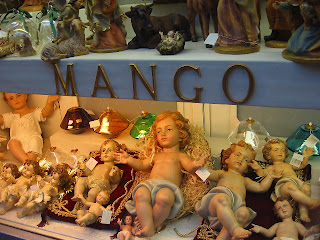 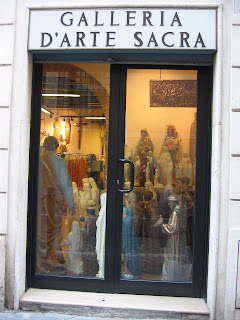 Saturday was my day for queuing. First - for the Vatican Museums - about 90 minutes standing. And then for St Peter's - only about 30 minutes. Crowds everywhere and St Peters with the atmosphere of a railway station. The museum hours are short in the winter - 10am to 1.30pm. It's impossible to manage. Beat the crowds and visit the collection (bits of it anyway) online.

Sunday I began with the relative sober surroundings of All Saints Anglican Church before fighting my way through rain-drenched crowds (having had to buy an umbrella from one of the Bangladeshi umbrella sellers who miraculously appear with umbrellas to sell the instant it starts raining) round the Spanish Steps. To the Palazzo Barberini - as much to see the building as the artworks in its gallery. A quick trip to St John's Lateran via one of the most unusual churches - St Mary of the Angels and the Martyrs - built inside the tepidarium of the Baths of Diocletian. 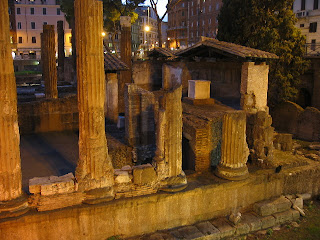 The city of cats 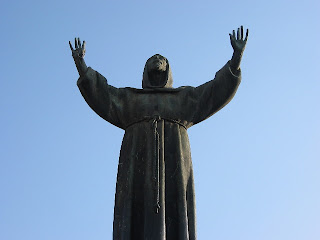 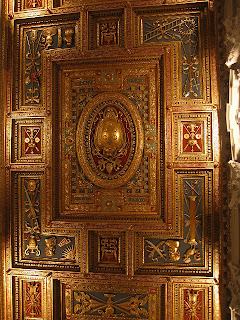 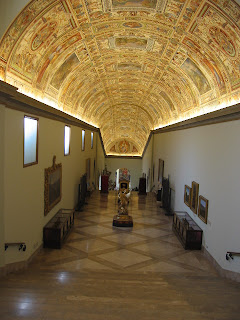 Monday - yet more religious buildings. The Lateran Palace museum - buildings to show power and impress others! Again - the buildings perhaps even more interesting than their contents. Then out to the southern suburbs to the Appian Way and some of the catacombs and other historical sites. I was able to get to the Catacombs of St Callistus one minute before the final group before lunch. It was truly impressive to go underground and see the burial places of the Roman Christians. Also the Basilica of St Sebastian on the Appian Way (so far the only church I was able to be alone in). The next church along the Way is also the only church I ever saw with a question in its title - the Church of Domine quo Vadis? (Peter's question to Jesus on seeing him entering Rome - a city which Peter was attempting to flee from). 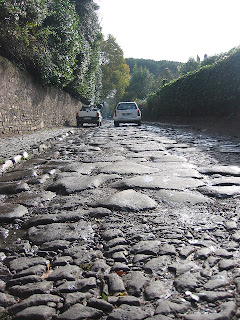 The Appian Way
The day's sightseeing was not yet over. Also in the southern suburbs is the massive Basilica of St Paul's Outside the Walls. Its size, ancient origins, and comparatively few visitors , made it a prayerful place. 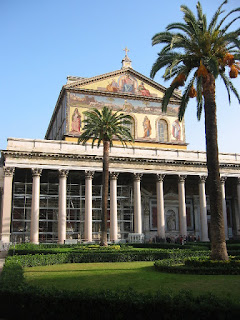 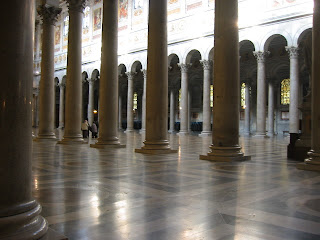 St Pauls Outside the Walls
Feeling somewhat sated with medieval and renaissance architecture I headed further south to the EUR complex. Designed originally for an expo which was prevented by WWII the buildings are a fine example of early modernism. In any place I visit I'm always happy to find somewhere off the beaten track - and this is it. 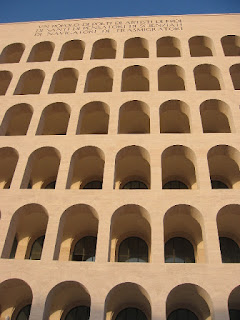 One of the EUR buildings
Finally back to the central parts of Rome to the only major basilica I had yet to visit - St Mary Major - where I suddenly found a lengthy procession of priests, bishops and cardinals starting a festive mass. They were mostly from Philadelphia Archdiocese and were there, at the invitation of Cardinal Law, with Archbishop John Foley, also of Philadelphia, who had been made a cardinal a few days previously. Also there was Cardinal Justin Rigali, Archbishop of Philadelphia.
After that it was a humble slice of pizza and back to the Anglican Centre where I am staying. 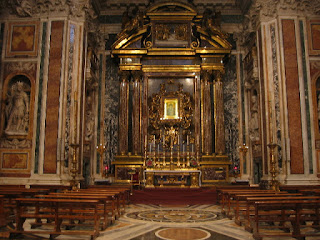 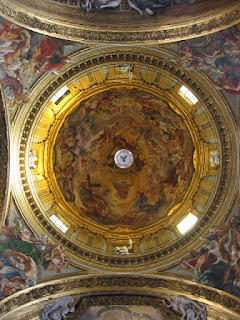 The dome of the Jesuit church, Il Gesu 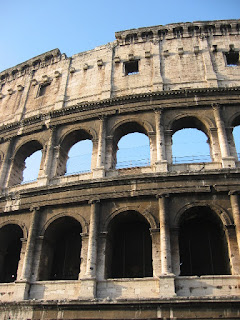 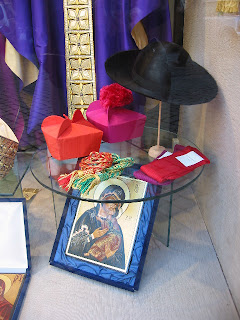 What the well dressed cleric is wearing 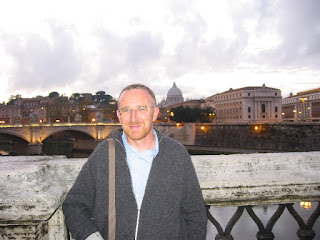 Just to prove that I really have been there
Posted by Christopher John ssf at 3:33 AM 2 comments:

This time to Rome - the first part of a 5-month journey. Nervous about arriving in a strange city and negotiating public transport with luggage. I have my phrase book - and I realise from having learnt musical terms that I know lots of ways of talking about the speed of things.

I'm in transit in Singapore airport waiting for my flight.

I hope this journey will provide me with some interesting things to write about - and the time to do so.
Posted by Christopher John ssf at 12:34 AM No comments: