All of which will be very useful.
Posted by Christopher John ssf at 5:12 PM No comments:

On Hearing the First Cuckoo in Spring

Today we heard the first cuckoo at the friary - the cuckoo normally wakes up around late spring - early summer. Other seasonal signs include the first snake - this one was on the road a few days ago and I think I drove over it. I think this week I will bring the fans out of storage.

I have also started (again) regular exercise at the local village hall which has a room equipped for that. Fortunately there is never anyone else there so I can lie down and rest on the bench press without anyone noticing.
Posted by Christopher John ssf at 5:29 PM No comments: 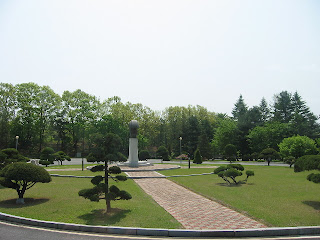 Beautifully landscaped gardens and buildings constructed with no expense spared. Birds flying around. No visitors casually dropping in. It could be a luxury retreat were it not perhaps the main focal point for the division between North and South Korea.

The beautiful garden was the site of a shoot-out a number of years ago. The wild grasses not far away witnessed the "axe murder" incident. It's a place with its own strange rules and customs maintaining a careful balance of fear - a balance which a misunderstanding could tip over into conflict. It's not for no reason that visitors such as myself have to sign a waiver recognising that our safety can not be guaranteed in the event of "a hostile enemy act". 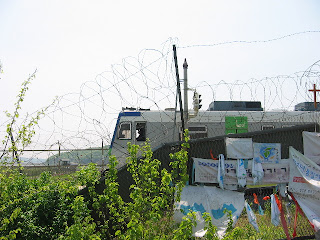 Not far from the Joint Security Area is Imjingak - one of the closest points to the North which visitors can freely visit. Here we can look at the railway (which a few years ago was extended to Dorasan Station) on which one day we might be able to travel through Russia to Europe or elsewhere in Asia. Imagine going by train from Seoul to Bangkok or Lhasa or Mumbai or London. 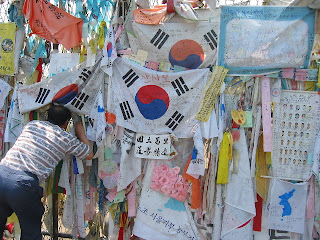 Flags and other items symbolise the heartfelt wish of so many for reunification.
Posted by Christopher John ssf at 8:45 PM No comments:

The Red Light of Failure - again

Yes - once again the red light flashed and the voice in the dashboard told me to come back next week . I won't for a while. I think I'll give up driving here and take the bus.
Posted by Christopher John ssf at 8:43 PM No comments:

The Red Light of Failure

And again the red light flashed and the disembodied voice from the dashboard told me to come back next week. I've got no idea why. This test is like playing a game when you don't know the rules and only know you've infringed one when you get disqualified. However they did produce an English guide to the test which does answer some of my questions.

I will try one more time. After that I decided it would be easier to get an International Driver's Permit from NZ since my NZ licence does permit me to drive 12 seater vehicles.

A further example of the gap between this ultra-rigorous artificial system and reality is in the taxi driver who drove me to the testing centre at 80km/h in a 60 zone, and then 120 in an 80 zone; who was unable to stop for a red light; and who was only able to avoid hitting the car in front when it stopped by making a sudden lane change without warning. This is nothing unusual of course. You study how to pass the test, you pass the test, and then you do what you want on the road.
Posted by Christopher John ssf at 7:13 PM 1 comment:

Getting A "Driver's License" (sic) in Korea

Our old friary van was replaced with a newer one (on loan from Seoul Diocese for three years). Very nice. Except that the new van has 12 seats rather than the 9 in the old van, although it's about the same size vehicle. This means that my Korean "Driver's License" [yes - that's what the card calls itself - I know the spelling is wrong] is not the right type for the new van. (My existing licence I originally received on the basis of having a New Zealand "Driver Licence"). And so now I have to pass a Korean driver's test.

After more than 35 years driving I failed the "course test". I would say that was because I didn't understand all the instructions and I had never driven the kind of small truck used for the test. Anyway - halfway through a red light flashed and a voice from a speaker in the car told me I'd failed and to come back next week.

The test is not so much a test of driving skills as a test of how well you can pass the test. That's a similar concept to most tests and exams here. They test your ability with the test but not at the underlying concepts, skills or knowledge. That's why everyone goes to academies to study the technique of passing exams.

Part of the driver's licence test here is that you automatically fail the test if you cross the centre line. That shows that the test has no relevance to what drivers do after getting their licence because I haven't yet seen one driver in our country area who can stay on their own side of the road.

So tomorrow I get another go at this highly artificial construct of driving round a course with flashing lights in the car, beeping sounds, but hopefully not the red light of failure!
Posted by Christopher John ssf at 5:14 PM 2 comments:

About time too you might say. Well perhaps the half dozen of you who keep asking me when this blog will stop suggesting I'm still swanning round the world, probably in San Francisco. Since then the swanning round has continued (actually work and community commitments took me back to Australia after the USA) but now has ceased for about 6 months. So I'll be in Korea until the beginning of November before the next lot of travel.

So no more travelogues for a while. Who knows - I might write some reflections on life in Korea, here in the midst of the mountains and cherry blossoms.
Posted by Christopher John ssf at 8:56 PM 3 comments: