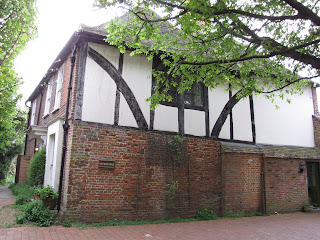 The Friary (and Master's Lodge) 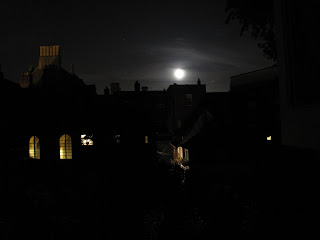 Night time view from my room 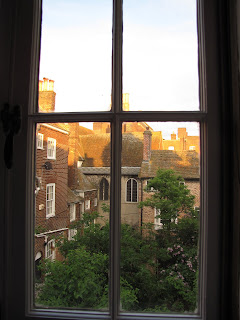 And in the daytime, from my room 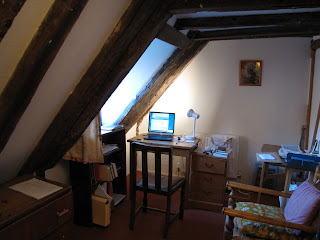 My 14th Century attic room!
Am back in Canterbury for another term at the Franciscan Study Centre and staying at the friary in the city centre. And once again kick starting this blog.

The study is two papers: Writings of Francis; and Franciscanism in the Contemporary World. So far so good although there are essays to write for each and a lot of reading. I'm the only student in both classes so there is no back row to hide in and no one else to make intelligent comments when my brain is mush.

My present community in Korea is actually the third time there have been Anglican male religious in Korea.

The first was in the early mission days in the 1890s when new and largely unformed members of the Society of the Sacred Mission struggled to maintain some form of community life despite the needs of an overstretched mission field. The lay brothers mostly left - both Korea and SSM - while the priest brothers mostly remained in Korea but left SSM. An exception was Fr Henry Drake who remained in SSM and later returned to Korea when Mark Trollope (ex SSM) was bishop.

The Society of St John the Evangelist in Cambridge, MA, was also involved. Recent correspondence with Fr David Allen SSJE has reminded me of this history and he has supplied the following information.

Fr. Walter Perry Morse, SSJE, died March 23, 1976, in Cambridge, MA, in the 84th year of his life, having been flown by medical evacuation from Taipei, Taiwan, 9 days earlier.

Fr. Raymond Thomas McDonald, SSJE, died July 27, 1973, in Boston, MA, in the 80th year of his life. He was in Korea from 1922 to 1924, but he carried an abiding love for Korea in his heart. During his final illness, using a Korean dictionary, he taught some Korean to a close friend so that they could recite the Lord's Prayer together in Korean when she visited him. After he left Korea most of his ministry was in the USA, a few years in San Francisco when the SSJE was in charge of the Church of the Advent of Christ the King, the rest of it was in Boston, and finally in Cambridge until he was hospitalized in 1972 in Boston.

===================
Thanks to Fr Allen (who had a substantial part of his ministry in Japan and who still keeps an interest in Asia) for the information and for reminding me and others of this layer of history, which is now in some way part of the foundation for what has come later.
Posted by Christopher John ssf at 4:11 PM No comments:

Gift giving and receiving is very much part of life in Korea.

Last week I gave the dentist and his staff some candles I had made. (He is giving me a generous discount - since he's an ex-Anglican). On the way back to the friary I filled the car with diesel and the service station gave its usual gift of a small pack of tissues. I stopped at the post office to post some letters and they had a gift for me - two tubes of gift wrapped toothpaste.

The heating oil people give us either a larger box of tissues (usually diesel scented since they've been sitting round in the cab of the tanker) or some refill packs of washing up liquid.

At the festival seasons gift-wrapped sets of cans of spam are popular gifts. (Spam - the canned meat - remember it? It's very popular in Korea)

Gift-giving can merge into bribery easily. Not the kind of gifts we receive - I cannot be bribed for a pack of smelly tissues~ but politicians and businessmen and others with power easily and frequently exchange gifts with the stated purpose of thanking someone, or expressing friendship, but usually with the real hope of receiving some favour.
Posted by Christopher John ssf at 3:14 PM No comments:

Korea is a country of teeshirts with fairly random collections of English words on them.

Seen today in Chuncheon: "Do you like hurt? Love drug 21 makeup"

Back in Korea - and Messiaen's birds

Back in Korea and still feeling the effects of suddenly moving from mid-summer to mid-winter.

Trying to re-establish my life here, pick up whatever routines are helpful, and not get saddled with things I'd rather avoid. Just starting up life here after nearly 5 months away. Some things have changed (there's a new postulant with us) and some things haven't (the friary is still operating on the summer timetable for some reason).

A review in the Church Times by Peter McGeary (5 Sep 2008) of a book about listening makes the point:

This year is the centenary of the birth of the composer Olivier Messiaen, whose music is peppered with the tunes of countless birds. I am told that much of his birdsong music could not now be written, because the tunes are no longer sung: mainly because of the noise that human beings have created, the birds cannot hear one another; so they cannot learn their songs from one another. The variety of their song is being diminished, because they learn by listening, and if they cannot hear, they cannot learn.

Posted by Christopher John ssf at 10:13 PM No comments: