Christmas in Stroud and flying to Nelson 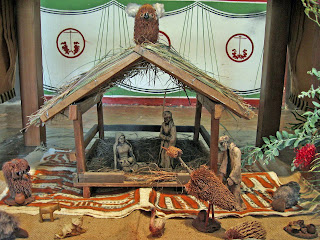 Christmas at Stroud was easy and relaxing. The crib (above) is made in PNG bush house style with Australian animals made from bottle brush. No angel or star on top but a koala. 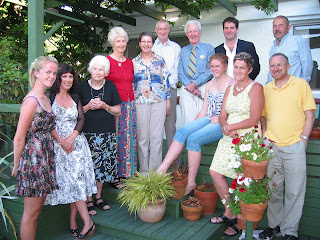 Then over to NZ for time with family in Nelson - and particularly for my father's 80th birthday (photo above).

Other than that not much to write.

Finishing in the library

Am finishing the current batch of work today. The next can wait till I return here in September.

Came across a book of prayers Praying Through the Christian Year by D. W. Cleverley Ford. No old fashioned stuffy piety here.

From a prayer when a car doesn't start:

Lord, I am frustrated,
I went to the garage
and the car wouldn't start.
Such a silly thing,
such a small thing,
but it knocked me off balance
all the day long.

I could give you a summary of St Paul's theology.
I could offer a fair outline of Church doctrine
and something about Aquinas, Erasmus and Calvin, too.

But of what use are all these trappings of religion
when my car won't start
and I am out of gear?

Posted by Christopher John ssf at 4:05 AM No comments:

That great Anglican spiritual guide Evelyn Underhill may have been an expert on mysticism but she was also very practical. In The Mount of Purification (our edition here is the Longmans' 1960 reprint) she writes about the three chief factors in developing the life of prayer in the parish. The first is a parish priest who prays:

The priest who prays often in his own church, for whom it is a spiritual home, a place where he meets God, is the only one who has any chance of persuading his people to pray in their church. True devotion can only be taught by the direct method.

The second factor is:

the parish church, considered not as a convenient place for Sunday worship, but as a House of Prayer, a home of the Spirit, a place set apart for the exclusive purpose of communion with God; and therefore an abiding witness to His reality, His attraction, His demand.

the formation of the praying group. I do not mean by this a hot-housy association of pious ladies, whose extreme exhibition of fervour too often tends to put everyone else off. This should be avoided at all costs. But there is surely no parish where it is quite impossible to find a few people, preferably quite simple and ordinary people, who care for their religion, and, if asked to do a bit of real spiritual work for it will respond.

She was one of the spiritual giants of the earlier 20th century.
Posted by Christopher John ssf at 7:40 PM 2 comments:

more from the library

And today - from the "other" Brother Roger - Br Roger Castle of the Community of the Resurrection in his book of aphorisms about prayer So Easy to Love (London: Longmans Green, 1957). [nearly as old as me!]

Do not bother about the past; it is past. And leave what is to come to God. The present moment is your concern. See that it is a part of the splendid orderliness of God.

The present moment is always an infallible indication of what God wants you to do now. It is possible he may only want you to be undecided. (p. 26)

We must be soaked in the Gospel. You should have a copy of at least one of the gospels in your pocket or in your bag. You can read the Penguin Four Gospels anywhere, and no one will know what you are doing. (p. 34)

What clear forthright advice. (The Penguin Four Gospels is an interesting translation by classicist E.V. Rieu - published 1953).
Posted by Christopher John ssf at 8:01 PM No comments:

Christianity is a shocking religion, although many of its adherents have managed to protect themselves from its terrible impact. Tears, an awareness of one's psychic fragility, and a deep sense of peace and joy are not the most obvious marks of believers today. Yet the shock of Christianity remains: the shock of its materialism and its particularity; the shock of its calling us to a messy and untidy intimacy. It claims that the flesh matters. It insists that history (the particularity of time and place) matters. Above all it claims that, in the end, nothing else but love matters.

Posted by Christopher John ssf at 4:22 AM No comments:

Today's gleanings from the library are two voices from the 17th century:

An Empty Book is like an Infants Soul, in which any Thing may be Written. It is Capable of all Things, but containeth Nothing. I hav a Mind to fill this with Profitable Wonders. And since Love made you put it into my Hands I will fill it with those Truths you Love, without Knowing them: and with those Things which, if it be Possible, shall shew my Lov; To you, in Communicating most Enriching Truths; to Truth, in Exalting Her Beauties in such a Soul.

And from Jeremy Taylor' s The Rule and Exercises of Holy Living:

As those meats are to be avoided which tempt our stomachs beyond our hunger, so also should prudent persons decline all those spectacles, relations, theatres, loud noises and outcries, which concern us not, and are beside our natural or moral interest. Our senses should not, like petulant and wanton girls, wander into markets and theatres without just employment; but when they are sent abroad by reason, return quickly with their errand, and remain modestly at home under their guide till they be sent again.
(Langford Press, 1970, p. 60)

Posted by Christopher John ssf at 7:20 PM No comments:

Philip Norman in his excellent book on NZ composer Douglas Lilburn quotes him as saying:

...the patterns of our landscape and seacoasts, the changing of our seasons and the flow of light and colour about us, that all these things show patterns of movement and characteristic rhythms. And these things in a subtle way affect our manner of living and I believe that they impress themselves on our minds in a way that will ultimately give rise to forms of musical expression.

Rhythm, according to Lilburn, was the key to music as it determined the 'shape and vitality of any melodic line', and 'in its larger sense of movement or flow it is in the basis of musical form'.

and today from Ireland

From a book about Irish monasticism, some Celtic nature poetry:

I have a bothy in the wood--
none knows it save the Lord, my God;
one wall an ash, the other hazel,
and a great fern makes the door.

The doorposts are made of heather,
the lintel of honeysuckle;
and wild forest all around
yields mast for well-fed swine.

This size my hut: the smallest thing,
homestead amid well-trod paths;
a woman (but blackbird clothed and seeming)
warbles sweetly from its gable.

This little sweet humble place
holds tenure of the teeming woods;
maybe you will come to see?--
but alone I like quite happy.

Posted by Christopher John ssf at 5:49 PM No comments:

thought for the day from John Powell

At the top of the library pile was John Powell's "Through Seasons of the Heart" - a compilation of his writings arranged for daily use. From December 12:

We know God in knowing Jesus. Jesus is the Word that was with God from all eternity, the Word that is God: Jesus. St. Paul calls Jesus "the visible image of our invisible God." (Colossians 1:15) Theologians have called Jesus our "window into God."

Posted by Christopher John ssf at 5:04 AM No comments:

First book off the rank this morning was De Mello's The Prayer of the Frog. He writes:

A young composer once came to consult Mozart on how to develop his talent.

"I would advise you to start with simple things," Mozart said. "Songs, for example."

"But you were composing symphonies when you were a child!" the man protested.

"True enough. But then I didn't have to go to anyone for advice on how to develop my talent."

Posted by Christopher John ssf at 4:59 PM No comments:

A new plan from today, seeing I am browsing dozens of books every day for cataloguing the library, but not really reading much, is to quote from something which has grabbed my attention each day. Today is the anniversary of Thomas Merton's death in 1968, and now the day set aside for commemorating him in the Anglican Church of New Zealand.

It was a relief when the piles of turgid Columba Marmion (although I see he's been extensively reprinted recently; perhaps if he didn't smell so musty he'd be a more attractive read) gave way to Merton late this afternoon. First was "Conjectures of a Guilty Bystander." with its opening passage about Karl Barth's dream:

Karl Barth had a dream about Mozart.

Barth, in his dream, was appointed to examine Mozart in theology. He wanted to make the examination as favorable as possible, and in his questions he alluded pointedly to Mozart's masses.

But Mozart did not answer a word.

I was deeply moved by Barth's account of this dream and almost wanted to write him a letter about it. The dream concerns his salvation, and Barth perhaps is striving to admit that he will be saved more by Mozart in himself than by his theology.

Each day, for years, Barth played Mozart every morning before going to work on his dogma, unconsciously seeking to awaken, perhaps, the hidden sophianic Mozart in himself, the central wisdom that comes with the divine and cosmic music and is saved by love, yes, even by eros. While the other, theological self, seemingly more concerned with love, grasps at a more stern, cerebral agape: a love that, after all, is not in our own heart but only in God and revealed only to our head.

Barth says, also significantly, that "it is a child, even a 'divine' child, who speaks in Mozart's music to us." Some, he says, considered Mozart always a child in practical affairs (but Burckhardt "earnestly took exception" to this view). At the same time, Mozart, the child prodigy, "was never allowed to be a child in the literal meaning of that word." He gave his first concert at the age of six.

Yet he was always a child "in the higher meaning of that word."

Fear not, Karl Barth! Trust in the divine mercy. Though you have grown up to become a theologian, Christ remains a child in you. Your books and mine matter less than we might think! There is in us a Mozart who will be our salvation.

For me one of the revelations of the divine in Mozart is what's going on in the background, in the "accompanying" parts - for they are never routine space filling formulae, but filled with flashes of divine inspiration.
Posted by Christopher John ssf at 6:43 PM No comments: